JOHNNY ROSE IN THE NEWS

In bursts Johnny Rose, clutching a thicket of balloons a black as the tuxedo he often wears. A wide, embarassed grin creases the face of Steve Jeager, who on this day, his 40th birthday, must endure the playful torment of a singing telegram. Jeager's family has come from everywhere to be here, and they stand smiling alongside his girlfriend, the architect of this wicked merriment.

To the 80-year-old tune of "It Had to Be You," Rose holds forth in song, his syrupy tenor rising above the din of clanking margaritas.

You used to be young, but now you are old

Your hair's turning gray. Look, you're wrinkled and old

What happened to youth - to tell the truth, I know this is cold

The singing telegram has been delivered, and the dining room is filled laughter and the happiness wrung from a song husbands might still sing to their wives. 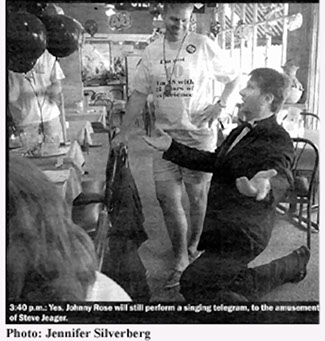 Johnny Rose takes on many personas as he delivers singing telegrams, candy and flowers to clients' loved ones.

An onlooker might have thought Johnny Rose was a serenading suitor when he strolled into Harry's West in Ballwin last week.

The object of his affections: 90-year-old Sylvia Cytron of Creve Coeur.

Dapper in a tuxedo and carrying an armful of long-stem red roses, Rose began to sing Elvis tunes.

"Are you lonesome tonight? Are you 90 today? Has your hair turned to gray? Can you recall what you did yesterday?" Rose crooned.

His next song, Nat King Cole's "Unforgettable" was also performed with a twist.

"That's why Sylvia, it's incredible that you think we're unforgettable, too," he said.

Rose is the owner of Johnny Rose Florist and Singing Telegrams in St. Louis. He offers clients candy, flowers, and song.

On this Sunday afternoon, Cytron's daughters have asked for Rose to sing a few tunes and present their mom with flowers during her birthday party.

Cytron's grandchildren and great-grandchildren had already performed a few surprise skits, but Cytron said the appearance by Rose was completely unexpected.

"I was shocked," Cytron said.

For Rose, part of the joy of his profession is being invited to share special moments typically reserved for close family and friends.

He said it's particularly poignant to attend birthday parties for older people, and he often begins those performances with a prayer.

"It's really an honor to be a part of something like this," Rose said of Cytron's party. "Obviously, the family is what life's really about."

Rose began his business in 1972. At the time he was living in California and wandering through bars, nightclubs and restaurants selling roses to raise money for the Unification Church and Rev. Sun Myung Moon.

He said his affiliation with the church was a way to rebel against his strict, conservative upbringing.

Since then, he has built a thriving florist and singing telegram business in the St. Louis region.

His training is mostly from on-the-job experience, but Rose attended classes to add polish to his voice.

He performs five to seven times a week, often singing tunes written by him or the family and friends of the honored guest. Impersonations of Elvis, Santa Claus, Austin Powers and the Grim Reaper are a few of his specialties.

Most of Rose's clients are celebrating birthdays and anniversaries, but on occasion he receives more unusual requests.

Rose recalls once being asked to perform for a top executive at Fleishman-Hillard Inc. The executive was a turkey hunter.

His colleagues had prepared a special tune and asked Rose to perform it dressed in a turkey costume.

During the performance, the executive pretended to shoot Rose. He responded by falling to the floor.

"I fell down dead in the middle of the boardroom," Rose said. "It was a riot."

With Tux And Song It Comes Up Roses

Johnny Rose is known in a hundred St. Louis bars. He's quite a sight in his tux with the black sequin bowtie. Quite a sound, too. Johnny loves to sing "New York, New York." He'll sing with the band. On a table. With the jukebox or against it.

That's how he sells flowers. You could say Johnny rose to the occasion. "Buy a rose and I'll sing a song," Johnny said. It must work. No one has offered to buy a rose if he'll shut up. "One guy did offer me a dollar," said honest Johnny. "But with my ego, I won't take less than five."

Johnny enters the singles bar, carrying a basket of fresh roses and carnations. The basket has a soft, romantic glow. That's from the novelty silk roses, lit by batteries. Johnny's customers also have a glow. His business blossoms after after 10 o'clock, when the booze makes everyone feel good.

"Buying a rose is a nice way to meet a new girl," Johnny said. "A rose is more tasteful than buying her a drink or pinching her." You can't argue with that.

Most of his roses are bought by men for women. "Maybe twice a night, a woman will buy a rose for a man. The women aren't sure how the men will take it. Men really like it. It's classy."

Johnny makes his way through the singles bar, stopping at tables. He sings two songs, sells two roses and gives a carnation to a regular. Business will pick up, he said. The night has just started. "Lounges are easy places to make a sale," he said. "People's defenses are down."

Johnny is used to tough audiences. He sold art prints and jewelry door to door. "Then I found I could get fresh flowers, and sell them in bars. Roses are a better item than art prints. You can come back next week, and they'll buy from you again. "People say this looks hard. It's not. I'm doing so well, I quit my other selling jobs. I probably sell more roses than many florists - 6 or 7 dozen on a weekend night." At $3 each.

Johnny made the switch five years ago. Slowly, he changed into a rose seller. "I started wearing the tux instead of street clothes. I started using the name Johnny Rose. It's easier to remember than Johnny Oldham." And he started singing. That was a natural outgrowth of his business. "A guy would buy a rose for his girlfriend's birthday, and want someone to sing 'Happy Birthday.'"

Soon he added, "Danny Boy" to his repertory. Everyone in a bar likes "Danny Boy," especially after midnight.

Then "New York, New York" came along. That became Danny's trademark. "I don't know what it is about that song. Everyone wants to hear it. I learned it by singing with the jukebox. "I'll sing other songs, too. In the rock bars, I'll try Steppenwolf, or something by The Doors." Johnny sings quietly at your table in some bars. His routine is in full flower at the Paddock Lounge in North County.

"As soon as I walk in there, someone throws a quarter in the jukebox and presses 701. They expect me to sing 'New York.' "I have a reputation from North to South to West County. They know me from Alton to the airport lounges. "It's nice work. When you sell roses, you don't make enemies. "Well, almost never. I did get punched out once, when I sold roses in a biker bar."

Johnny works about five nights a week, but his big business is on the weekend. "The main drinking hours are 10 p.m. to 1 a.m. Then I rush, rush, rush from one place to another. "After the bars close in St. Louis I go over to the Illinois side, and work Pops and Oz. I finish my night over there. About 6 a.m. I go to the flower markets.

"One guy at Oz has a $500 account with me. He'll buy my whole basket, put it on the bar, and say, 'Put it on my tab, Johnny.' He was a real poor kid who made a lot of money in construction. Now he wants to make people happy." Johnny sometimes gives a flower to a woman sitting alone. "I'm not trying to fire on her," he said. "I clear it with my wife first. But when a woman is all dressed up, she should know she's appreciated.

"I'm like Dan Cupid. I deliver roses and messages." A 6-foot Cupid in a ruffled shirt can be a little startling. "Some people don't know how to take me," Johnny said. "They want to know who's the jerk with the flowers. But I make them feel at ease. You may not believe it, but I used to be very shy.

"I guess you could call me a late bloomer."

Singing telegrams over the phone, nationwide or around the world.

Johnny Rose and one other full-time employee

Call me for those extra special requests!